The case for garish green houses

L and I recently had this rather odd exchange a few days ago when driving through a nearby village. We were looking for a particular house, which is always a bit of a challenge in Czech villages.

Houses are easy to find. A specific house is more challenging. 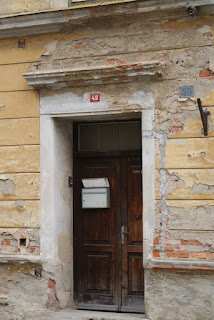 The root of the problem is how the government numbers houses. Being American, I am used to grids of roads, often numbered instead of named, with neat lines of houses, numbered sequentially. The house at 395 1st Avenue West sits across from 396 1st Avenue West. The next road over is almost certainly 2nd Avenue West with its own orderly rows of neatly numbered homes.

And the city planners sigh with satisfaction.

In the Czech Republic, houses are numbered according to when they are officially completed. Presumably, there is an official register where all the buildings are neatly listed. House number 395, which was completed on 6 July 2014 is followed closely by number 396, which was completed, perhaps, on 7 July 2014.

And a government bureaucrat pulls out her pencil and ruler, enters another house into the register, and gives a contented nod.

There are benefits to this system. We once got a letter that was addressed only as:
[L's last name]
[House number]
[Postcode].

I was very impressed, until L pointed out that of course we were the only house of that number in the whole village.

Which means, naturally, that the sender of the letter had been terribly indulgent to include the superfluous [Last name]. The purity of the minimalism had been tainted. Ink was wasted.

The Czech house numbering system also means that one can fairly accurately pinpoint the ages of houses. The under-100s are the core of our village. The mid-100s to 200s were built in a flurry of construction in the 1960s. The 300 right next to an 86 was almost certainly built recently on an extra bit of garden.

Most likely fond parents who gave a bit of garden to their son or daughter so they could live closely, I tell myself with an indulgent smile as I walk past.

The 92 that looks terribly modern? Almost certainly a dramatic reconstruction of the original building.

I've been on a mission to identify the oldest houses in the village, which has helped me keep some semblance of sanity when Smalls is on his mission to find all the snails or catalogue every rock. Finding a 20 or under is a highlight of any walk.

But, of course, there is one major downside to this system of numbering houses. One big, glaring, unavoidable problem.

Big cities like Prague have fixed this by giving houses two numbers. One, on a red plate, is under the traditional system. The other, on a blue plate, recognises that sometimes people need to know the exact physical position of a building.

However, this is not considered necessary in the smaller villages. Also not necessary in our particular village, it seems, is a variety of street names. In our section, there are no less than five roads with the exact same official name. So, for instance, U Hřiště sits parallel with U Hřiště, and they (it?) are (is?) intersected by (of course!) U Hřiště, which snakes around a corner to join into yet another U Hřiště.

And so, when intrepid Praguers venture out of their shining blue-plated metropolis to visit us, I try to be as specific as possible.

'We are the house with the big new fence, next to an very, terribly green house. Turn right on  U Hřiště, and then take the first left on U Hřiště. If you come to another U Hřiště, you've gone too far. If you start to see 300s, you're on the wrong side of the village. If you get to the motorway, you're on your way to the wrong village.'

And, almost inevitably, 'Hi, Yes, I thought I saw you're car go by. I'll come out and wave at you. I'm in a black coat. Blue scarf. If you see someone with a dog, that's the wrong waving villager.'

Maybe this explains our neighbours' inexplicable - and unmissable - choice of paint colour.

Expatová - me
L. - my Czech husband
Smalls - our preschooler
Smallest - the toddler